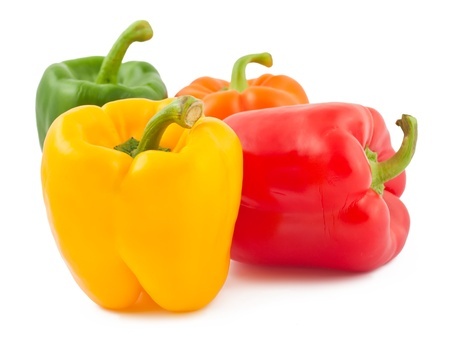 The Capsicum species originated in South and Central America, and Christopher Columbus brought it back to Europe when he returned from the Americas. Records show that capsicum has been used in cooking since 6000 BC. In Australia, capsicum became popular thanks to European and Asian immigrants who use it extensively.

They belong to the Solanaceae family along with tomatoes, potatoes and eggplant. They are often referred to as ‘peppers’ and come in a variety of colours, flavours and sizes. They are commonly used in stir fries and salads and can be stuffed or grilled and marinated in garlic and olive oil.

How are they grown

Capsicums thrive in warm conditions and are particularly sensitive to cold and do not grow below 10ºC. They grow best in deep well drained, medium textured soils, but will not tolerate saline water.

Where are they grown

Capsicums are grown in most vegetable regions in Australia that have a temperature range of approximately 15ºC to 32ºC.

How to know when they are ripe

Capsicums can be picked green at the mature primary stage. This is when they are firm, have thick walls and are dark green. If picked too early, they have thinner walls and are inclined to wilt.

Capsicums usually begin flowering 1-2 months after planting and will take up to around 110 days from planting to first harvest which then continue until cold weather reduces yield or frost stops growth.

Capsicums can be damaged by frost. Plants affected by cool weather tend to harden and seldom regain the vigorous growth necessary for high yields. During cold weather, the fruit remains small, hard and malformed because of uneven pollination. The fruit may also have numerous growth cracks.

Fruit may be sun-scorched during hot weather and will show poor setting and poor colouring when temperatures are above 33°C.

Fresh consumption with a small amount being  processed.

Capsicums should not be stored for long periods, or with fruit such as tomatoes that produce ethylene as the gas reduces storage life. Storage conditions should be 7-13 ͦ C at 90-95% relative humidity for a maximum of two to three weeks.

Capsicums are an excellent source of vitamin A and C (red contain more than green capsicums). They are also a good source of dietary fibre, vitamin E, B6 and folate. The sweetness of capsicums is due to their natural sugars (green capsicums have less sugar than red capsicums).

Capsicums are usually packed on their sides in 6 kg and 12 kg cartons or plastic returnable containers. If being sent directly to a supermarket the standard black supermarket crate is used.

Machines are available that will wash, brush and grade capsicums for size. The fruit also need to be visually graded for colour, so the package contains fruit only of one colour.

Capsicum can be used to produce the spice paprika. Red capsicums are dried with forced-air heaters and ground to a fine powder.

Medical or natural medicine use

Capsicums are used as a herbal medicine to treat poor circulation, fever and colds, and digestive disorders. Oleo-resins can also be distilled from paprika for the use in pharmaceutical products.